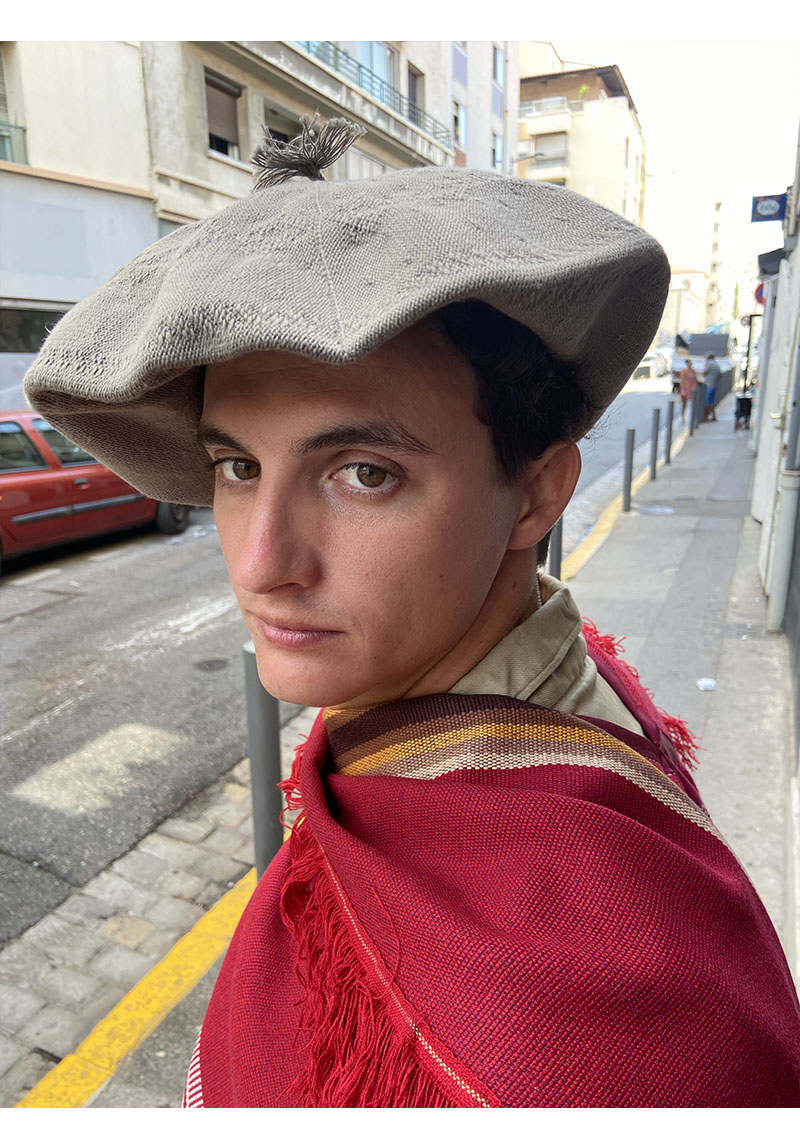 The authentic Argentinean beret, the boïna, inherited from the Basque beret. Entirely made in Buenos Aires.

One size. Diameter of 31cm.

Made in Buenos Aires, Argentina.

Dry clean should be preferred.

Crossing the Argentinean prairie on horseback, the gaucho, guardian of herds in the wide open spaces, is a central figure in the Argentinean imagination, a popular hero who is continually exposed to nature's wrath. Argentine meat is known all over the world thanks to the know-how of this farmer. In this dry desert, his hat, and more particularly his beret, becomes his only shelter. This unique refuge protects him from the rain, the wind, as well as the overwhelming sun.

The beret, usually called a boïna, is so popular thanks to its robustness and versatility. It has become popular item among gauchos. Made of wool, it is entirely knitted in one piece, in a tight circular knit that reminds us strangely of our authentic Basque beret in the manufacturing stage that comes before its felting. At the beginning, the Basque is the same in diameter as in technique, then the dipping of the wool in hot water will considerably reduce the size of the beret by 4 to 5 cm, the Argentinean is therefore larger. This is its distinctive feature. This wide structure of the unfelted knit allows the piece to be flexible, while still being able to retain its initial shape, with openings in the knit, inserts of symbolic patterns, and a long tassel that finishes it off at the top.

With a very wide brim, you can shape it to your head according to your use, the angle of the sun or the wind, sometimes giving it the shape of a cap, or a cool hat for the young gaucho generation, and then put it away easily by folding it into your pocket because it is not very bulky.

The link with the French Atlantic coast of this model garment is real: this piece of Basque clothing has crossed the oceans, on the heads of Basque immigrants fleeing the ancient world for Argentina, from the 16th century onwards, trying to work as shepherds. These migratory flows were initially the result of individual decisions, most of which were guided by the desire to conquer new lands and the taste for adventure in the new world. "Men without land in a land without men", this statement sums up the opportunity that these new lands represented for migrants, farmers or fishermen who had been ruined by the wars of the Revolution and the Empire. Free of Indians, these lands were divided up geometrically by the Argentine government, who gave the ownership to these Basque newcomers. From the 16th century, therefore, and until the 1930s, this migratory flow was ongoing, although sometimes more limited. The gauchos are truly the heirs of this double culture, Basque - Argentina, distant and yet neighbouring. It is not surprising, then, to find in Argentine berets the shape and technical know-how of Basque craftsmen.