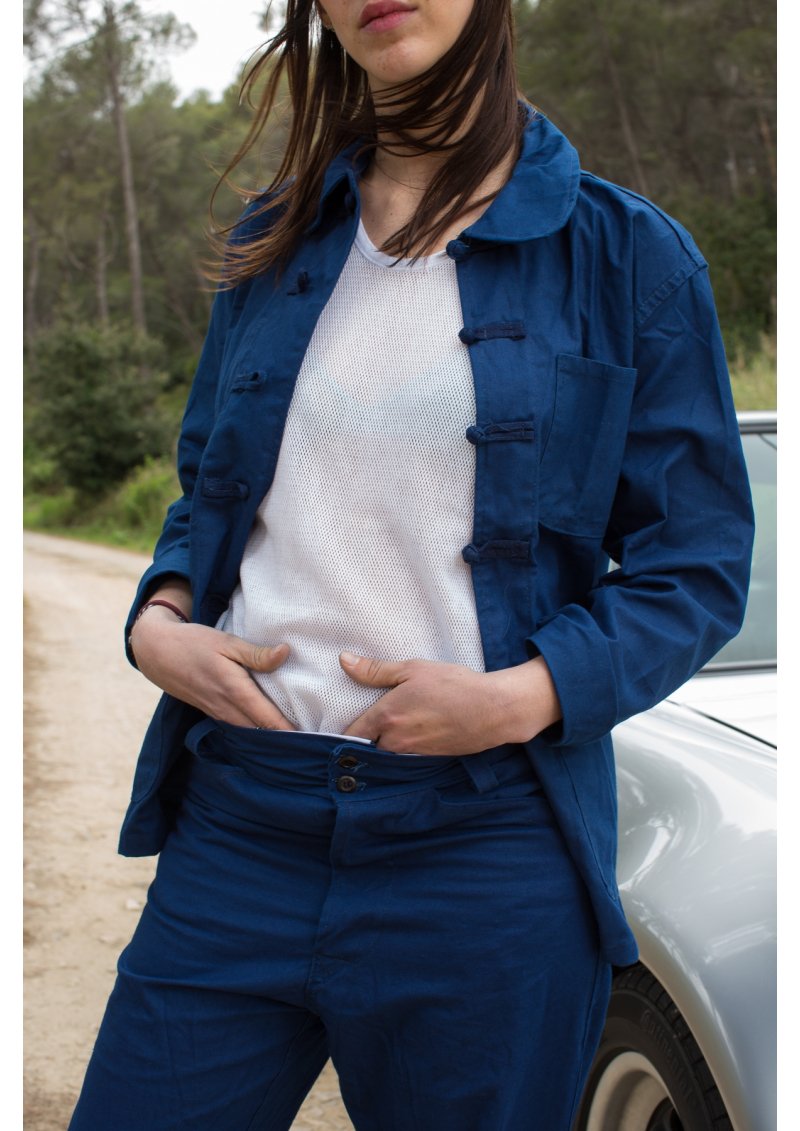 The Chinese work uniform in its original version!

A genuine French label for a genuine Chinese garment, still made in China, this is the strange story of l’Anti Cher: going back to a time when China Blue became very popular among the people of the Mediterranean basin, especially France and North Africa. In the 1930s two importers, one French and one Chinese set up trade together to bring into the French market, especially the colonial market, large quantities of the famous “Shanghai Blue” coat, traditionally worn by Chinese workers and peasants. This modest garment was known from the time of the Silk Road when trade with China was very intensive around the Mediterranean. The coat is sold across the far east by the French ancestor of the current owner with huge success.

In the 1970s, the fashion for China Blue took off among the Parisian elite, to the delight of the owner of l’Anti Cher who met the new demands while keeping his traditional customer base.

In 2010, l’Anti Cher went entirely Chinese but didn’t know much success on home soil. It was then bought back by the son of the original importer who has retained the original model and manufacturing process.

Before wearing your Chinese workwear, you must fix the colour.

Leave the garment to soak for one night in sea water (or 10 litres cold water with 300g coarse seasalt).
The colour can also be fixed in a tub of water, adding white vinegar (40cl for 10 litres cold water).
Rinse in clear water and let dry before wearing it for the first time.
First machine wash separately.

Like all 100% cotton garments, this one will shrink slightly with the first wash.

Please see our size guide for more detailed measurements. We recommend that you choose 1 size above your average size as the uniform shrinks slightly in the first wash.

The Chinese workwear is recognizable by its intense blue indigo colour, its jacket’s typical Chinese buttons and Peter Pan collar, and its chino cut trousers with button fly and adjustable waist.

Here it is, the iconic 100% cotton uniform straight from China which has crossed revolutions and various continents to get to you. As it so successfully intertwines functionality and style, the Chinese workwear has seduced very distinct sectors, from the work sphere to the world of haute-couture. 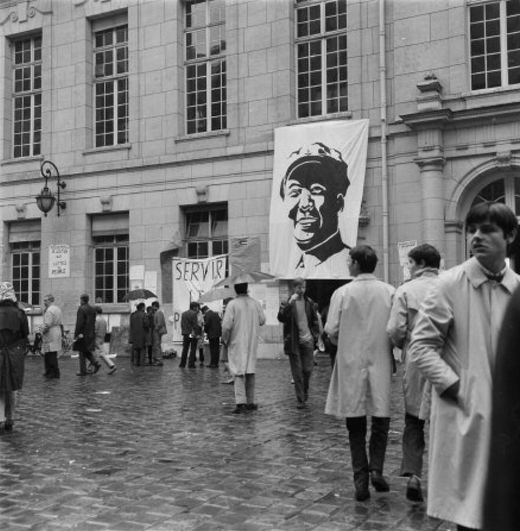 Those who recognize a good cut beyond its historical symbolism include Yves Saint Laurent, naturally, and Michel Klein - who loves the Chinese work jacket so much that it took the lead at the Guy Laroche fashion show at the Ritz, and then Inès de la Fressange, who is always up to date when it comes to timeless basics.

The presence of the Chinese work uniform in the fashion world owes much to the young Maoists in a 1968 Paris, the advocates of the “Little Red Book” in Saint-Germain-des-Prés; and although it is the symbol of Mao Zedong’s revolutionary China in the collective unconscious, its origin goes a lot further back.

Mao forbade the wearing of the qipao, the traditional Chinese garment, as it was considered a symbol of capitalism and imposed upon all Chinese citizens the blue uniform traditionally worn by the working classes. 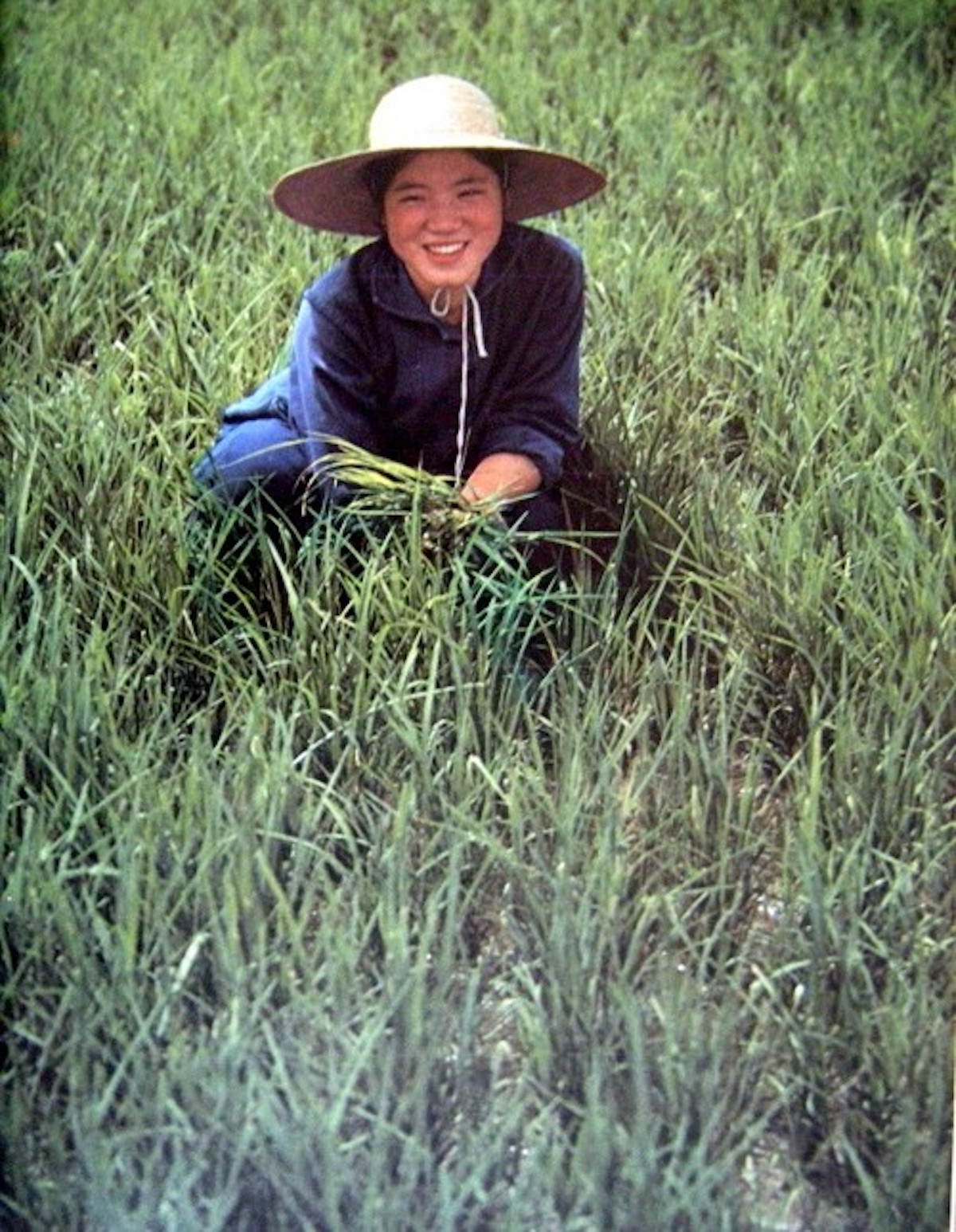 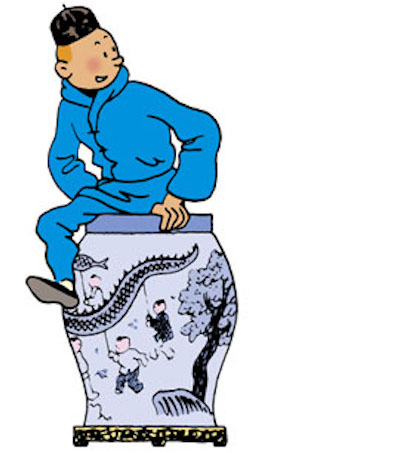 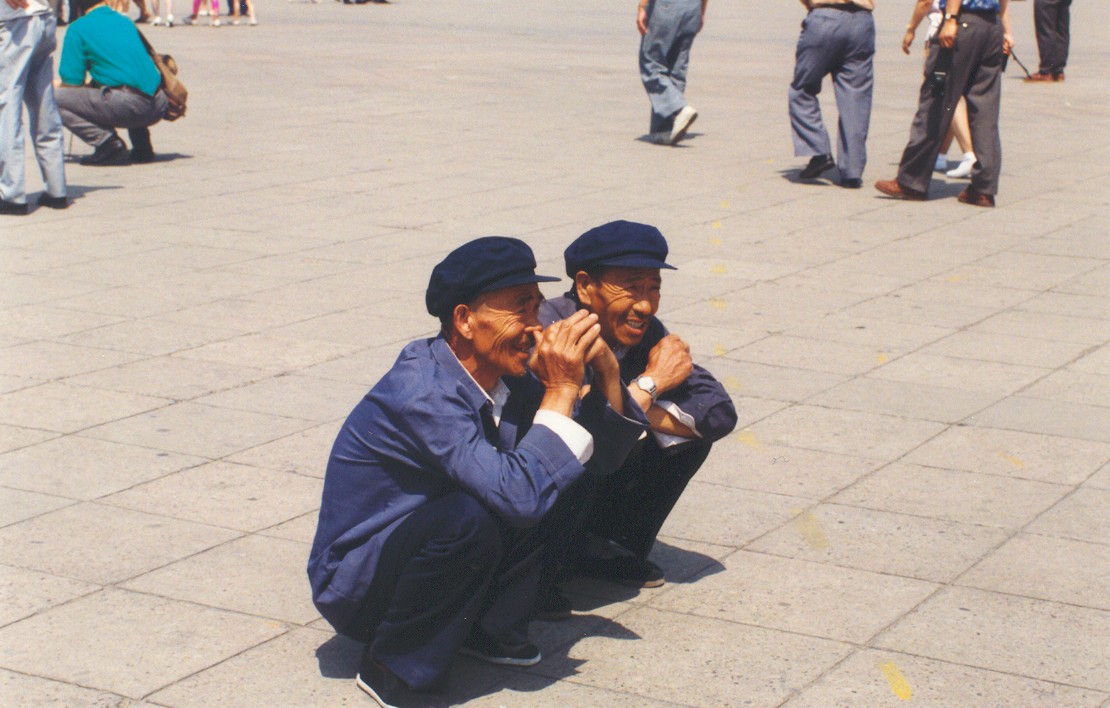 Supposedly, Mao drew his inspiration from the philosopher Sun Yat-sen who wore the blue workwear daily, as early as the beginning of the 20th century. Architect of the Republic and founding member of the Kuomintang, he adopted the uniform from the Chinese peasants to illustrate his theory fully. It represents an ancient costume in the Chinese countryside, where it was embraced for its many advantages; it is solid, easy to wear and practical. For instance, the indigo dye serves as an insect-repellent which is a very useful feature in the hot and humid rice fields.

Thanks to these characteristics, it also conquered the shores of the Mediterranean, long before the terraces of Parisian cafés. Imported along with other exotic treasures from faraway China into the docks of the large port cities, the Chinese workwear, also called the “Shanghai Blue”, was a cheap, indestructible and practical work uniform, and over the years it somewhat came to represent the blue jean of the Mediterranean. It first seduced dockers and fishermen, then farmers, cattle breeders as well as shepherds and became the uniform of Corsican adventurers as much as the old men of Marseille. It quickly grew popular and soon spread to Algeria, Tunisia and even Egypt. 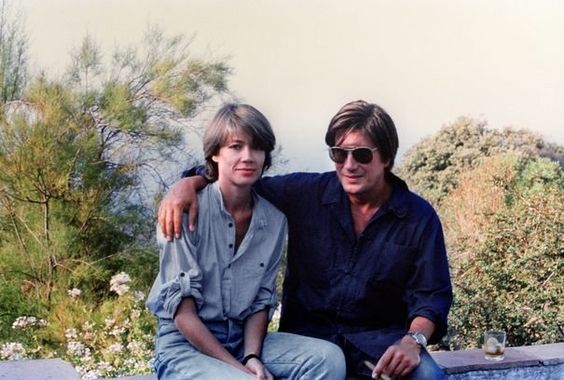 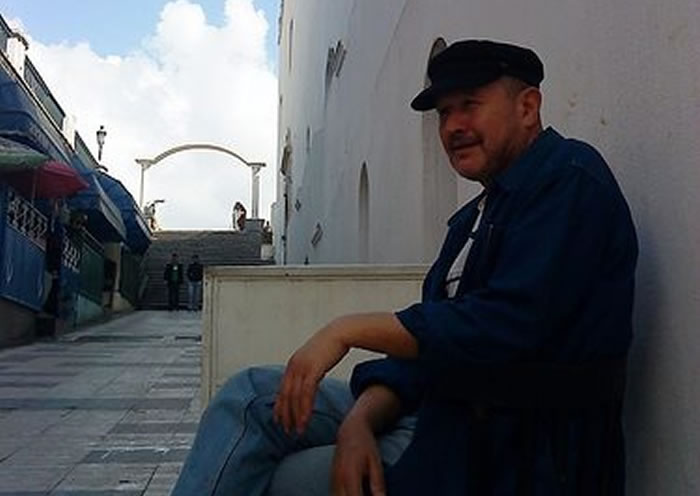 However, the introduction of the Chinese blue workwear to the fashion world is undoubtedly Parisian and anti-establishment. It is the darling of the 1968 activists, worn in street protests and smoke-filled meeting rooms where dreams of changing the world were born, and in more glamorous contexts, like in various art galleries with Marxist stances.

Jean-Luc Godard marked our minds with his film “La Chinoise” in which Juliet Berto and Anne Wiazemsky wore the blue workwear so well. César, sculptor from the south of France, with a soft spot for functional things, adopted it soon after. 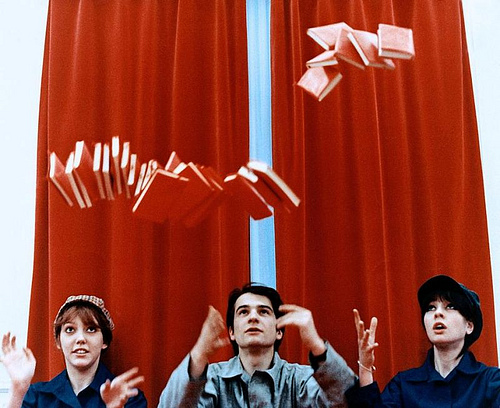 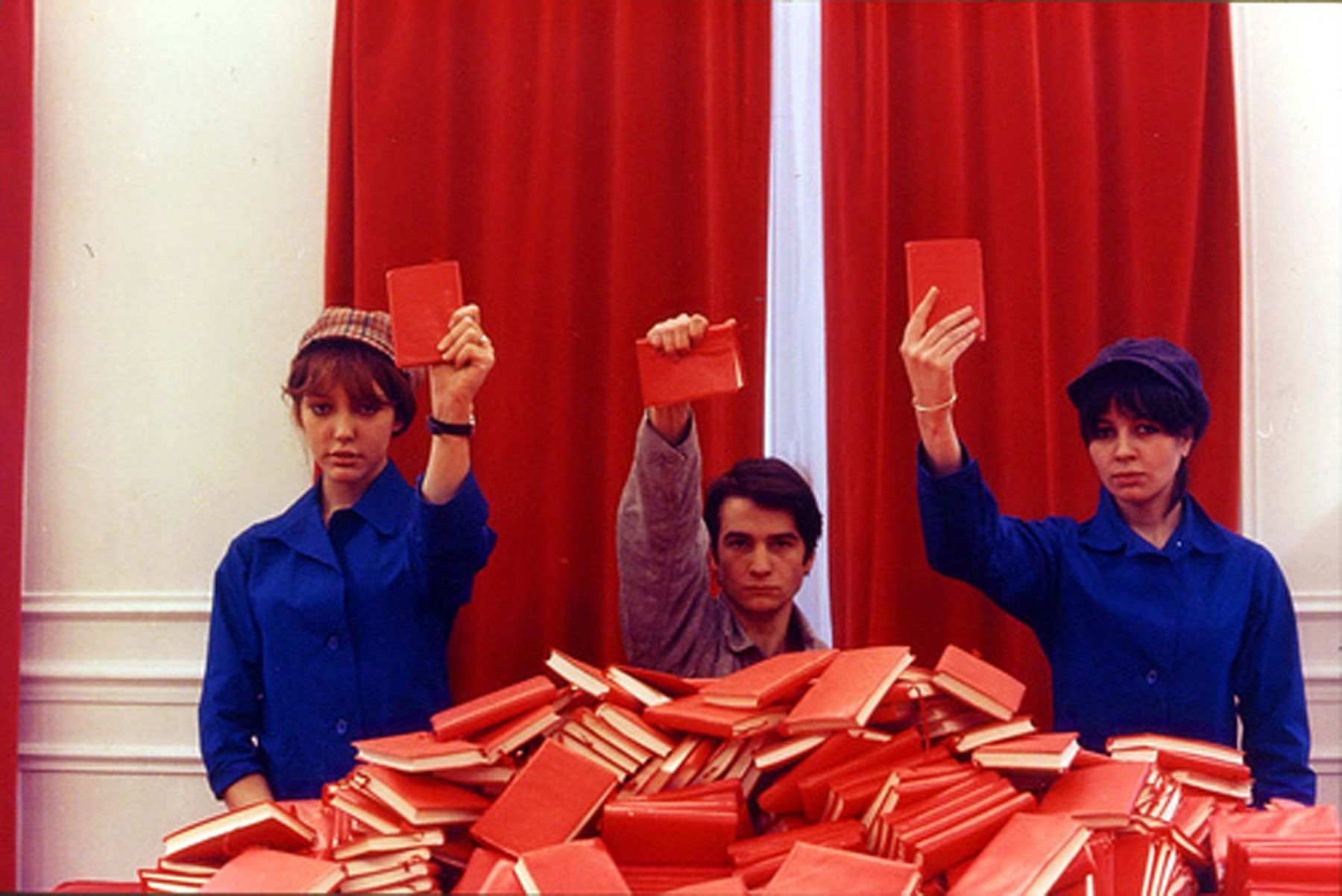 At the time, it was unthinkable for a leftist intellectual to wear a suit and one reflected a lot about the notion of the modern man’s uniform. The designers Michel Schreiber and Patrick Hollington developed this concept and encountered a huge success with their workwear collection inspired by the Chinese work uniform.

And so, the Chinese workwear logically entered the fashion world, and once again, in a very egalitarian way as it would seduce all social classes; in the 70’s, you could find it at Prisunic, a French discount supermarket, as well as in Kenzo’s collection of 1975. Then agnès b. whose first shop at Les Halles, featured authentic Chinese work clothing found in Barbès, with the labels “Filou” and “Anti-Cher” (the same as deToujours) before starting the production of her own design in a beautiful crêpe fabric. 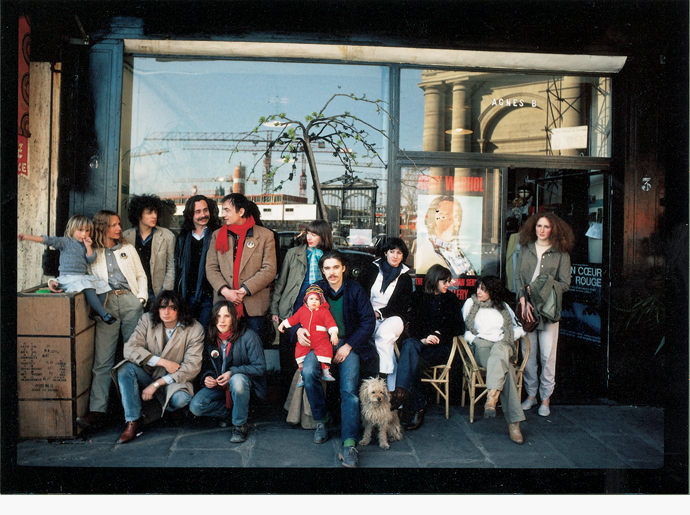 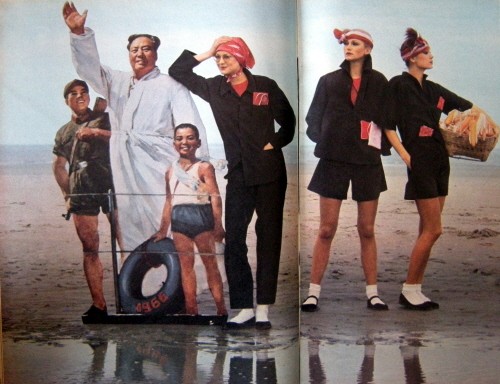 In the Saint Laurent Rive Gauche winter collection of 1976-1977, the Chinese blue workwear showed no signs of its humble roots but dressed in velvet and gold.

The aristocratic beginnings of a boho future.

Its transformation as well as reinterpretations continued and reached a climax in 1985 when Jack Lang, the French Minister of Culture, wore a version designed by Thierry Mugler, to the National Assembly, a provocation at a time when Mao was not a subject to joke about. Then, Yves Mourousi, French journalist, who wore the Chinese jacket on the red carpet at the Cannes Festival.

The Mao jacket and trousers definitely deserve a place in the Fashion Hall of Fame, even if you only wear them to go to the beach or for gardening Sundays.

deToujours offers you the most authentic and Chinese version, of course.