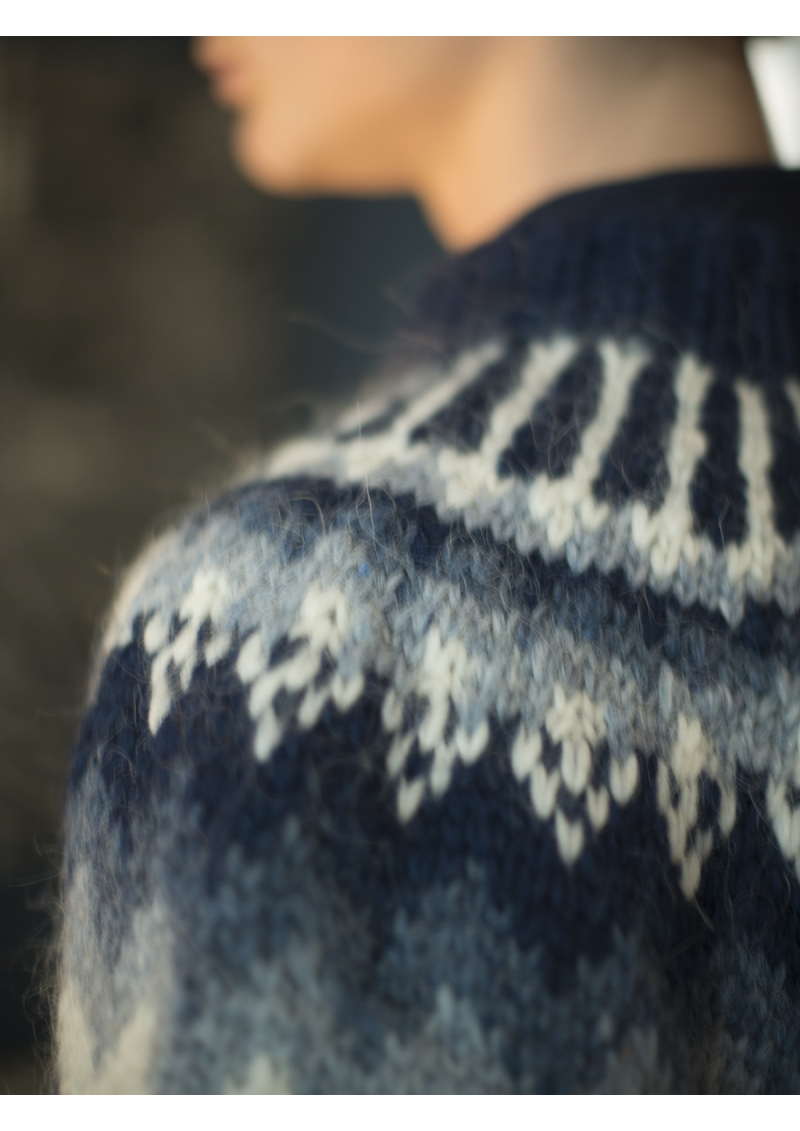 The Real Lopi Sweater from Iceland

The legendary lopi, or lopapeysa, the traditional Icelandic sweater, handknitted in wool from the unique Icelandic sheep. Each sweater is made by the members of the Handknitting Association of Iceland and signed by the person who made it for you. Each sweater is custom-made for you.

- Available in women's sizes (XXS to XXL) and men's (XS to XXXL). The lopapeysa has a pretty large cut so that you can fit many layers - it is worn as a jacket in Iceland. See the size guide above.

- Delivery time may take around 3 weeks as each sweater is made on demand by the members of the Handknitting Association.

The Handknitting Association of Iceland

The Handknitting Association of Iceland was founded in 1977 by a group of people, mainly women, who wished to increase their income by selling their handknitted pieces like the lopi or lopapeysa, in the unique Icelandic wool. Today, all the products are still handmade and signed by the members of the Association.

The Handknitting Association of Iceland

The lopapeysa is handknitted in 100% Icelandic wool. This wool is unique as it contains two different kind of fibres, one resistant and insulating, the other one soft and breathing, giving the lopapeysa very complementary qualities.

THE HANDKNITTING ASSOCIATION OF ICELAND

100% Icelandic wool. Thank to its composition, bacteria don't attach to the sweater which makes washing unnecessary. It is enough to let it hang out to air. If you wish to wash it, choose to handwash and dry flat.

THE HANDKNITTING ASSOCIATION OF ICELAND

A: Chest width in cm/in

B: Length from neck (not including collar) to bottom of garment

C: length of sleeve from wrist to joins under arm.

We all know this sweater with its graphic pattern, like a woolly representation of the Christmas season. It has been such an important source of inspiration to fashion, who reintroduces it every year, that you almost forget its original who it alone, has the unique advantages of the tradition of its territory in the far north of Europe; a wool with exceptional properties against cold and humidity, and a design at last refound.

The lopi, or lopapeysa, the traditional Icelandic sweater, is defined by its unique quality, handknitted in unspun wool of Icelandic sheep and its circular and symmetrical yoke pattern. The name lopapeysa goes straight to the point as it is made up of two words: lopi, standing for unspun wool from the Icelandic sheep and peysa, which means sweater in Icelandic. Although its history is fairly recent and its origins mixed, the lopapeysa has become the symbol of Icelandic culture and is so much more than just a sweater. It is the heart of Iceland which translates the importance of the Icelandic sheep and their wool, the impact of the wild, subarctic nature and its harsh climate, a history characterized by isolation and difficult living conditions where knitting proved essential to secure a livelihood. Besides symbolic meaning, it plays an important role in the Icelandic economy and employment especially thanks to tourism. It says a lot that the Icelandic word for sheep is the same as for money.

The Icelandic sheep, an old and stubborn race, are unique as they are the result of genetic separation due to centuries of geographic isolation. They have evolved for over 1100 years in the harsh subarctic climate of Iceland, thus developing a very particular kind of wool. In fact, their wool is composed of two layers – the outer fibers, called “tog”, are long, strong and water repellant whereas the inner fibers are short and soft. Lopi, the unspun wool, is a unique combination of these two layers. The result is a lightweight and durable material with powerful insulating qualities and a strong weather resistance. That is why the lopapeysa is often worn without a coat (it even replaces the raincoat) and has always been very popular amongst fishermen, farmers, horse(wo)men and adventurers. In addition to these great qualities, it doesn’t need washing – due to its composition, bacteria don’t attach to the wool and it is enough to hang the garment out to air every now and then. 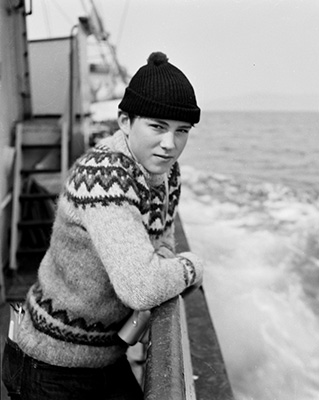 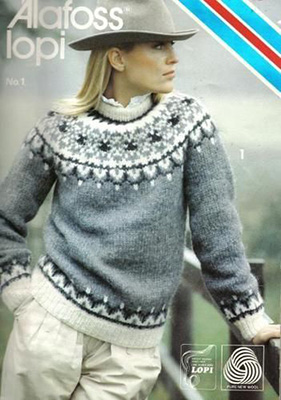 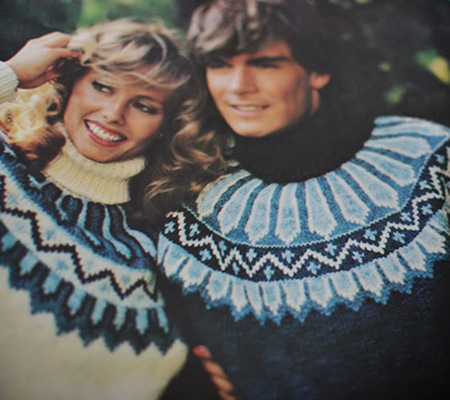 There are many theories regarding the origins of the lopapeysa and although it is impossible to say which one is accurate, it seems to be the mixture of various influences in a unique Icelandic composition that has evolved throughout centuries.

First, it is important to know that knitting has always been very important in the Icelandic culture, most likely ever since the 16th century. Wool was (and is still today) an abundant raw material in the country which was very suitable for weather resistant clothing. Today still, most of the population know how to knit and children learn to knit at an early age in school and by their parents.

The advent of mountaineering in the 19th century and of skiing at the beginning of the 20th century within the social and intellectual elite, contributed to making the Icelandic expertise the number one reference for extreme weather clothing and defined the aesthetics that have marked the collective unconscious of what a winter sports outfit should be. 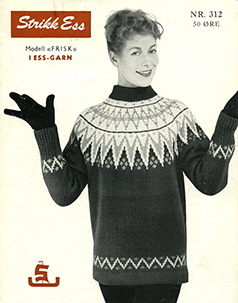 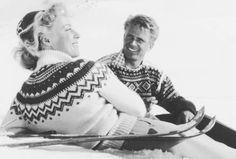 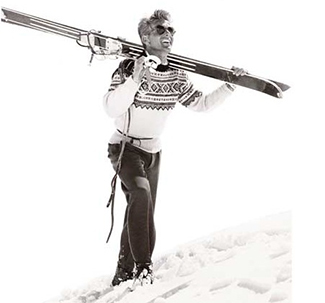 Wooden fires and winter cabins, altitude and elegance, first on the rope and white adventures, not a single imagery without the lopi, which will quickly spread with the rise of winter sports during the 50’s and 60’s. Soon it appears outside Scandinavia, far from winter paradises, in the cities during the cold season. 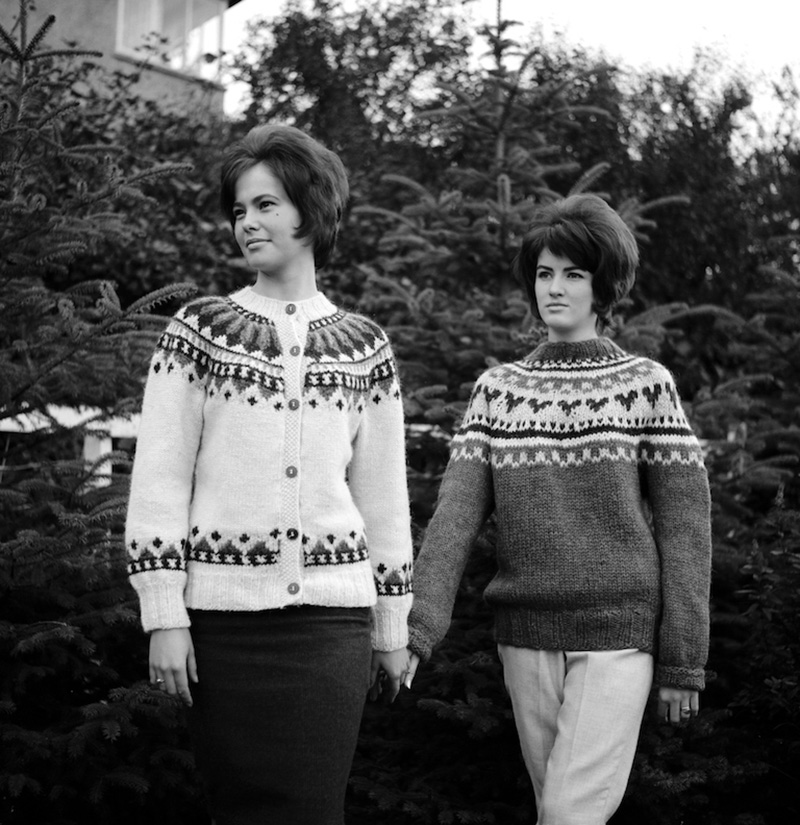 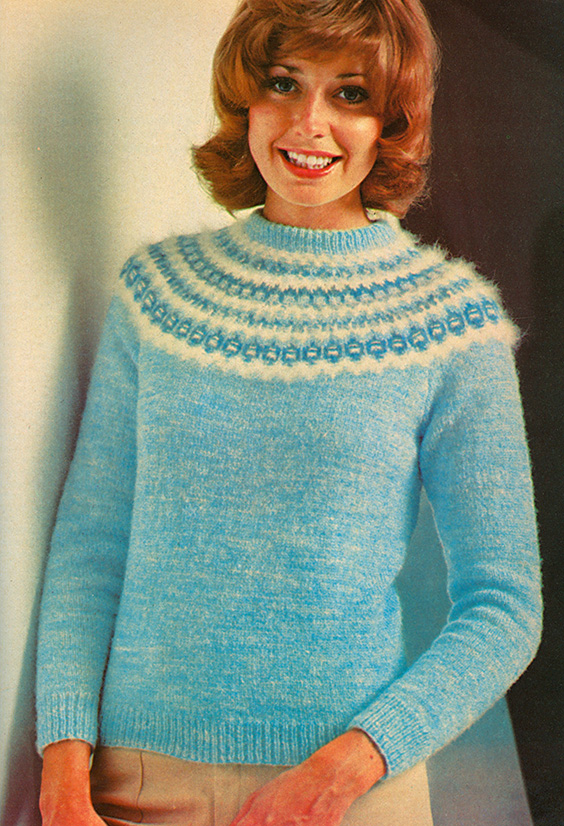 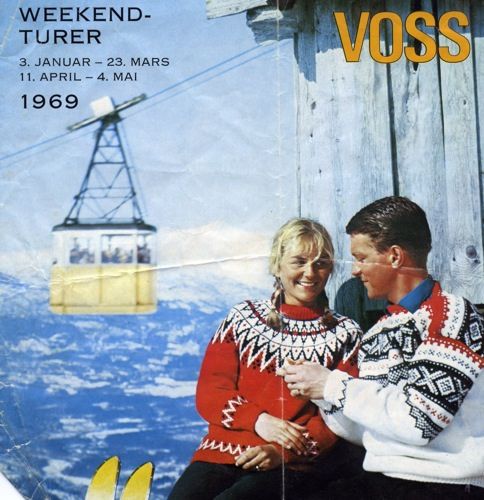 The wave of 1968 would only accentuate the world’s love for the lopapeysa: the return to nature and simplicity according to the taste of hippies, who seem to have influenced all the 70’s, would make this sweater a style reference for a whole generation. With some flare jeans, a pair of clogs and a natural leather bag, it is the darling of every young person and fashion editor, who regularly included it in the fashion magazines, from which, it would never leave, inspiring ready to wear brands of the 80’s before becoming an iconic wardrobe piece. 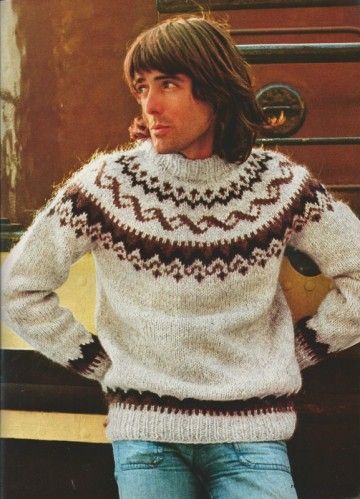 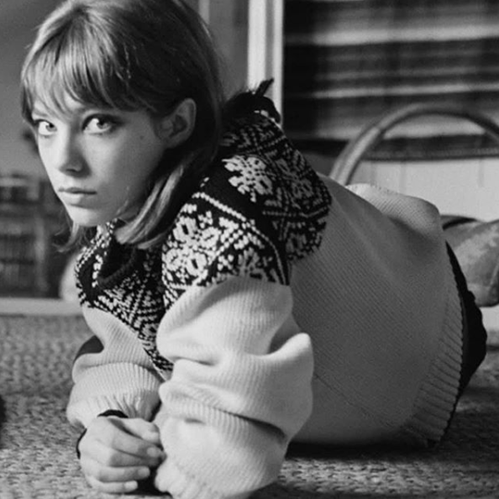 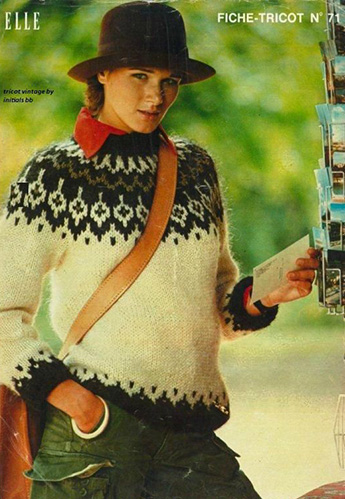 Whether the patterns are the colourful and graphic trace of the traditional costume of Greenland and its collar or, the symbolic image of snowflakes, Icelandic horses and other folkloric patterns, they are also the universal image of a wonderland where Santa Claus lives next door to the lopi.

deTOUJOURS has once again gone to the source of style to find for you, lovers of ancestral expertise and culture, the real lopi, handknitted in Iceland by the members of a handknitting association defending the local traditional handicraft. Your sweater is knitted by hand by a member who signs the sweater, made for you. You will keep it a lifetime, its qualities at the service of your comfort and style.