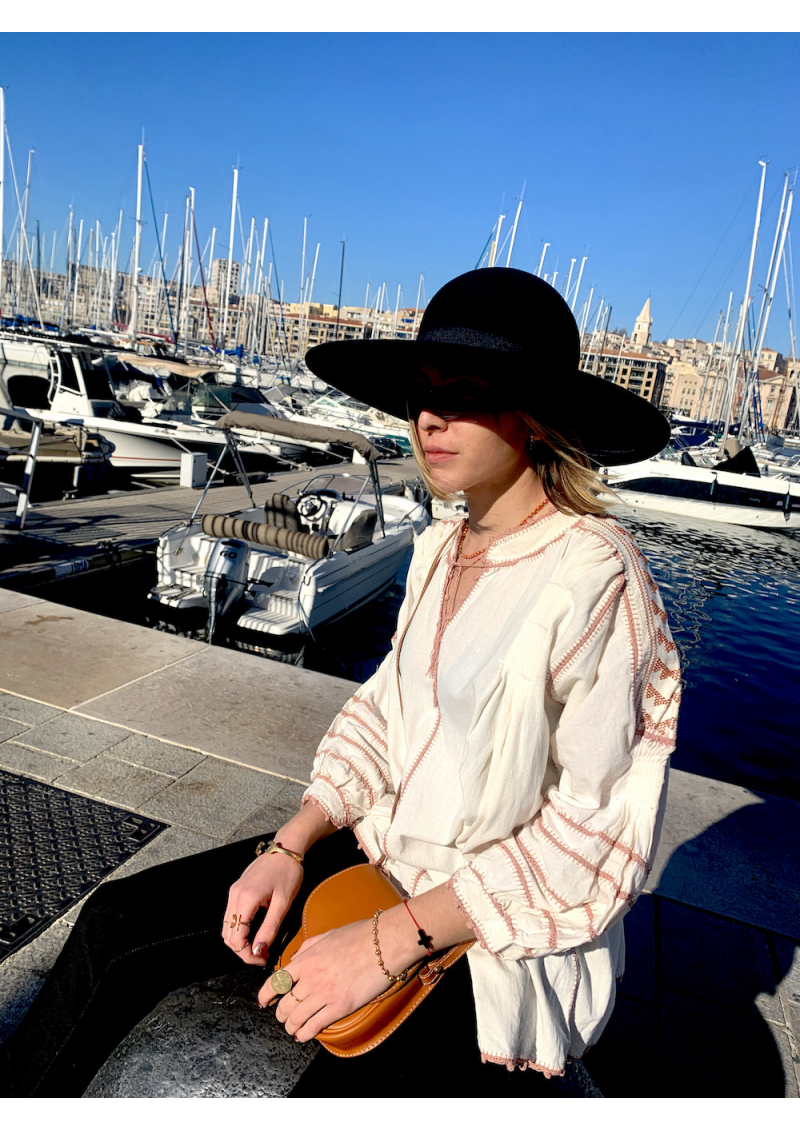 The authentic blouse dress from the Mexican Tlacolula valley. Entirely handmade according to the original techniques.

Available in two lengths as a blouse or a dress.

The Sirena in blouse or dress, is not strictly speaking a historical model of Mexican culture but more a kind of hybrid garment, a combination of several Mexican ancestral skills and aesthetics, of an original blouse that is no longer worn and of evolution of Mexican society. It is inspired by the simplicity of the extinct, immaculate, white cotton dresses of the Amerindian native tribes (such as the Lacandons) while adding the complexity of this local craftsmanship to the country's delicate embroidery (omnipresent on huipils and rebozos), to the mastery of crochet, or smocks. All this is concentrated on this precious dress.

To discover the origins of these gems that are the Sirena blouse and dress, you have to go deep into the Mexican Tlacolula valley. In the middle of the forests of exotic and centenary trees, beyond the mineral petrified waterfalls of Hierve El Agua, where the small Zapotec village is, this precious village where Vicky grew up, the artisan who works with Pascale Charmet, the passionate Frenchwoman who brings back these woven, embroidered, hand smocked textile pieces for deTOUJOURS.

Vicky is infused with the history and culture of the indigenous people and is inspired by these special landscapes. The land of mezcal, the century-old algave alcohol which, in the 20th century, watered the United States under Prohibition, earning itself a reputation as an alcohol that drives you crazy. It is also the land of "stone mosaics", pre-Hispanic ruins, at the centre of which history and myths blend together.

She grew up in this small village, strengthened by this historical and symbolic heritage, where a rural exodus is draining the vital forces out of the country. As a child, Vicky kills the boredom by learning the art of crochet. Throughout her training, she perfected her techniques in contact with local and well-known creators while staying in the village. As an adult in the 1990s, she manages to market her pieces. For her exceptional work, she receives assistance from the government, which enables her to employ up to sixty women from the village.

Nowadays, Vicky uses a pedal loom to produce the exact amount of cotton she needs, thus perpetuating the idea of an ancestral sustainability. This exceptional blouse is made from 100% cotton from Mexico, and takes more than thirty hours to make.

The local textile tradition inspired foreign visitors early on, when they discovered, fascinated, the traditional cloakrooms still worn by Mexican women. From the end of the 19th century, this aesthetic and the new taste of precious exoticism propagated by Fortuny the Venetian dressmaker of Spanish origin, to the beginning of the 20th with the halo of Frida Khalo the influence continues to travel. The 1950s massively spread an image of a traditional "look" conveyed by a Hollywood filming Americans on the go in Mexico, the 1960s and 1970s were also a time of fantasized spread of the traditional Mexican wardrobe. The spaghetti Westerns in Mexico paved the way ("For a Fistful of Dollars", "The Rough and Tough"), and while ponchos are everywhere at Woodstock and coloured embroidered blouses invade the streets of San Francisco, this time it is the hippie movement that is at work in a perpetual renewal of the love of these clothes, generation after generation.

Some of the genuine pieces are forgotten in the long history of the evolution of Mexican society, but evolve while preserving its know-how and its own aesthetics thanks to this vivid syncretism. The technics, materials and patterns used still force the admiration of the greatest fashion designers. Isabel Marant, among others, is inspired by them and spreads this bohemian spirit on the haute couture catwalks.

With deTOUJOURS, it is exhibited, as always, in its original design. The Mexican craftswomen who work with our "sourceuse" take their skills from the source of the history of this timeless garment.