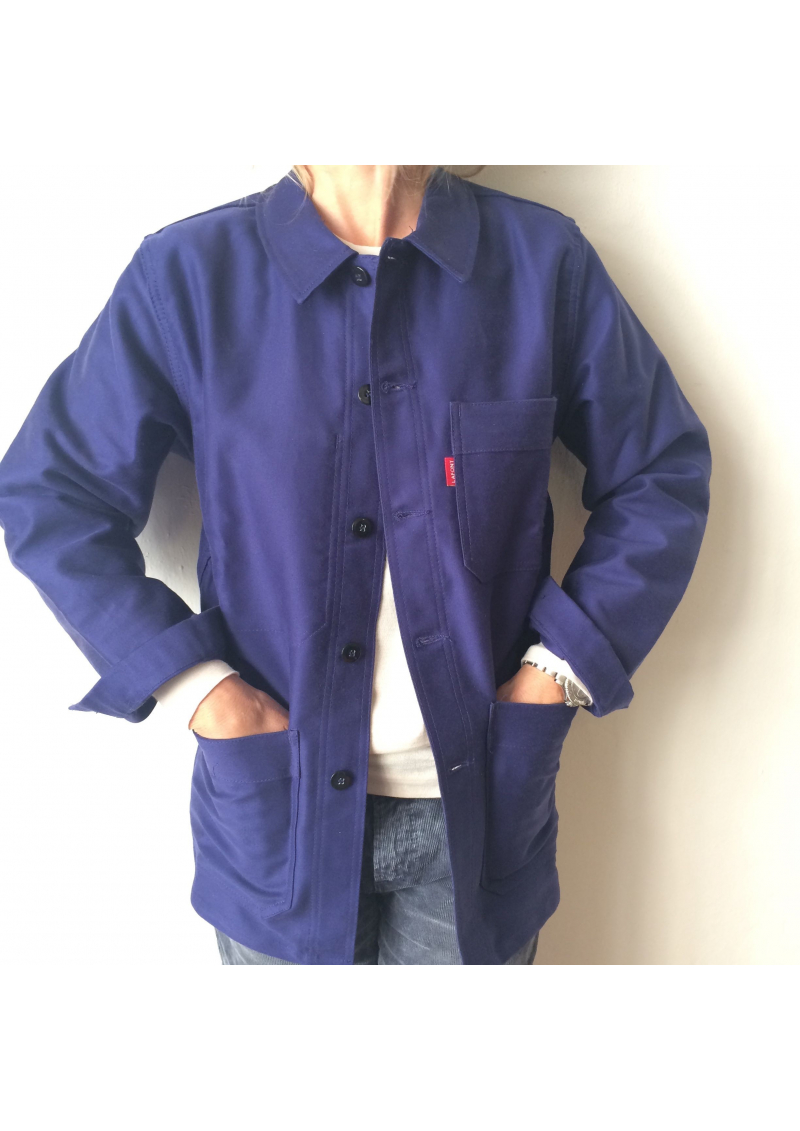 The genuine work jacket from Adolphe Lafont. Original model from 1896.

Please refer to the guide size down below

Like denim, moleskin is well-known for being tough and hard-wearing, getting better with age. It is also warm, perfectly adapted to winter weather and breathable in summer weather. Moleskin is the material of choice for workwear in France.

The name Moleskin comes from the English “mole skin” because of its softness.

The material is very tightly woven and covered in tiny “hairs” which protected the workers from molten metal splashes in foundries.

Moleskin was widely used for making their work trousers and also their aprons. This material is part of the fustian range of textiles, thick twilled cotton cloth with a downy texture which once shorn suggests mole skin.

In France, workwear manufacturing expanded at the end of 17th century in response to the rapid development of industry. Work clothes were then made of cotton threads woven in different ways to produce corduroy, satin and moleskin. Adolphe Lafont decided to create clothing adapted to each profession.

The industrial revolution led to the use of blue working coats. Intended for the worker, they were resistant and practical. 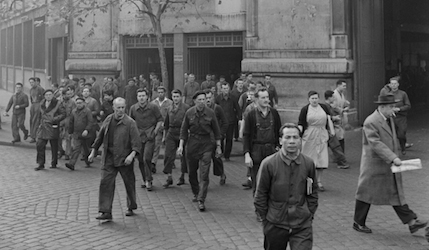 Its multiple pockets (three outside and one inside) ensured that the worker could keep useful and less useful tools close at hand, while its shortened sleeves prevented it from getting caught in a sharp machine.  It owes its name to its colour, Prussian blue, obtained from 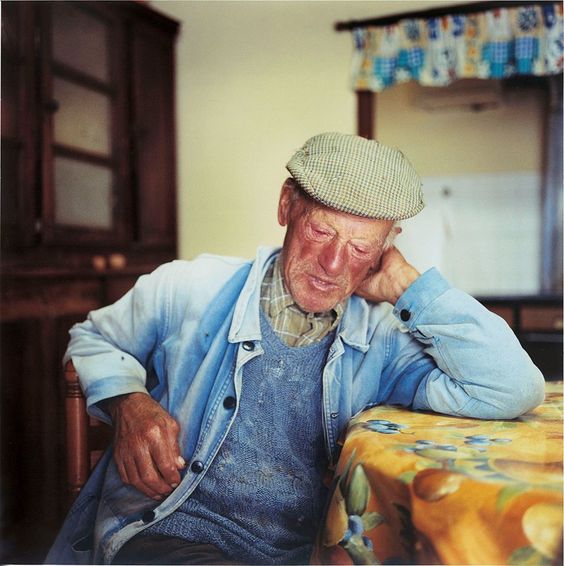 indigo, a low-cost, low-maintenance dye plant. The choice of moleskin, a thick, brushed fabric, guarantees the safety of the workers who wear it. This sturdy jacket protects against sharp tools as well as metal splashes.

The moleskin jacket lived through the decades and quickly became a symbol. Cut from fabrics of varying colours depending on the work profession, it is a tool of differentiation and identification. Unlike the old work coats, which were sometimes decorated with embroidery 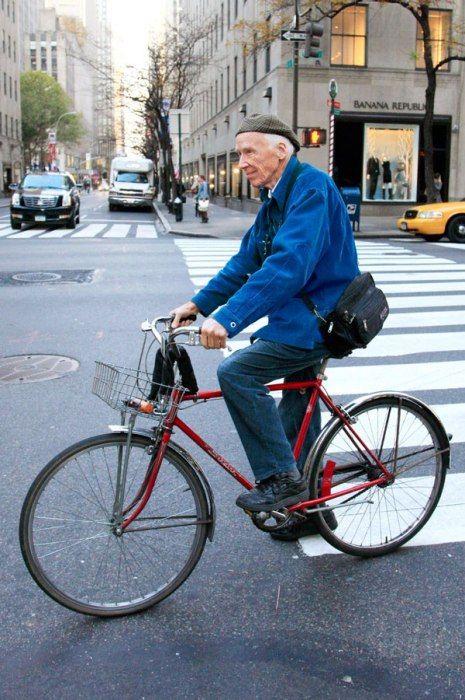 borrowed from the regional costume register, it is not an indicator of geographical origin and does not differentiate the age or sex of the wearer. The "blue" embodies the expression of a more social and professional, working-class and masculine identity. It is also a political image, the figure of a class that extends beyond the individual, as shown by the visual vocabulary developed by the parties and trade unions in the inter-war period. With the expression "blue collar", it even becomes a metonymy: the collar designates the jacket, the jacket the worker, and the blue the metaphor of those who wear it, in opposition to the "white collar", the figure of the managers or even the employer class. Roland Barthes rightly mentions this: "Blue overalls are used to work, but they also display work". 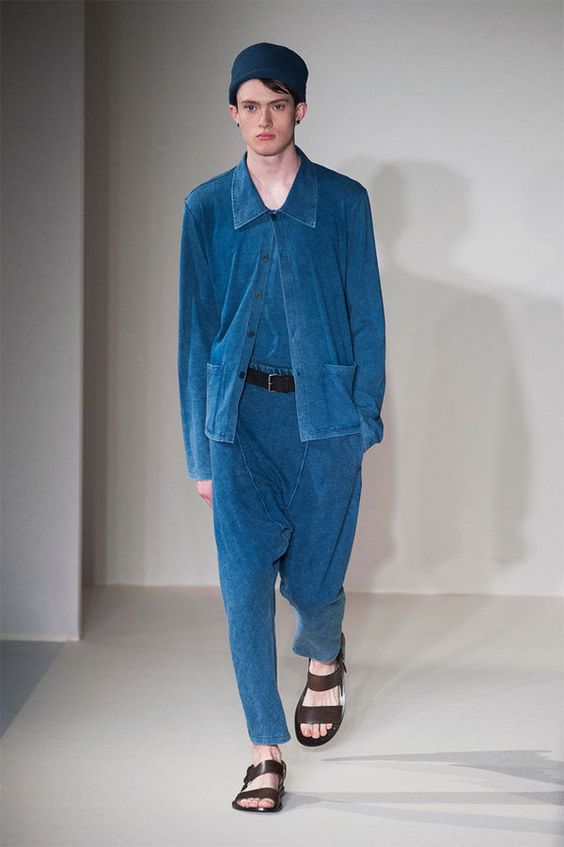 Over the years, blue overalls gradually lost their primary function and became a receptacle and symbol of protests. From the factory to rural work, blue overalls found their place in the city. After the First World War, it became a support for several artists and thinkers who reflected on the renewal of clothing in 20th century society. The industrial aesthetic, represented by artistic movements such as the Bauhaus, influenced clothing culture from the 1920s. In May 1968, it was worn by the student strikers as a claim to an inheritance, and was hijacked, taken up and quoted well beyond the student demonstrations. The work jacket in itself inspired the fashion industry and soon there was an international craze for French workwear. In 1968, Yves Saint Laurent proposed a work suit. In 1999, it was Alexander McQueen's turn to draw on the working class wardrobe, this time for women. In the 2000s, Jean Paul Gaultier invited the overalls, while Hermès presented a jumpsuit. In 2015, Agnès B., Dries Van Noten and Kenzo were directly inspired by French workwear. Finally, in 2018, Maria Grazia Chiuri, for Dior, had her models walk in blue overalls.

This enthusiasm is being spread internationally, particularly in Japan, where, not without connection with the developments in vintage and second-hand clothing, the question of signs of use is finding new recognition: often grated, with holes, with the colour faded in places and sometimes patched all over, the oldest blue work jackets, which show the signs of their function, are gaining a new form of popularity.