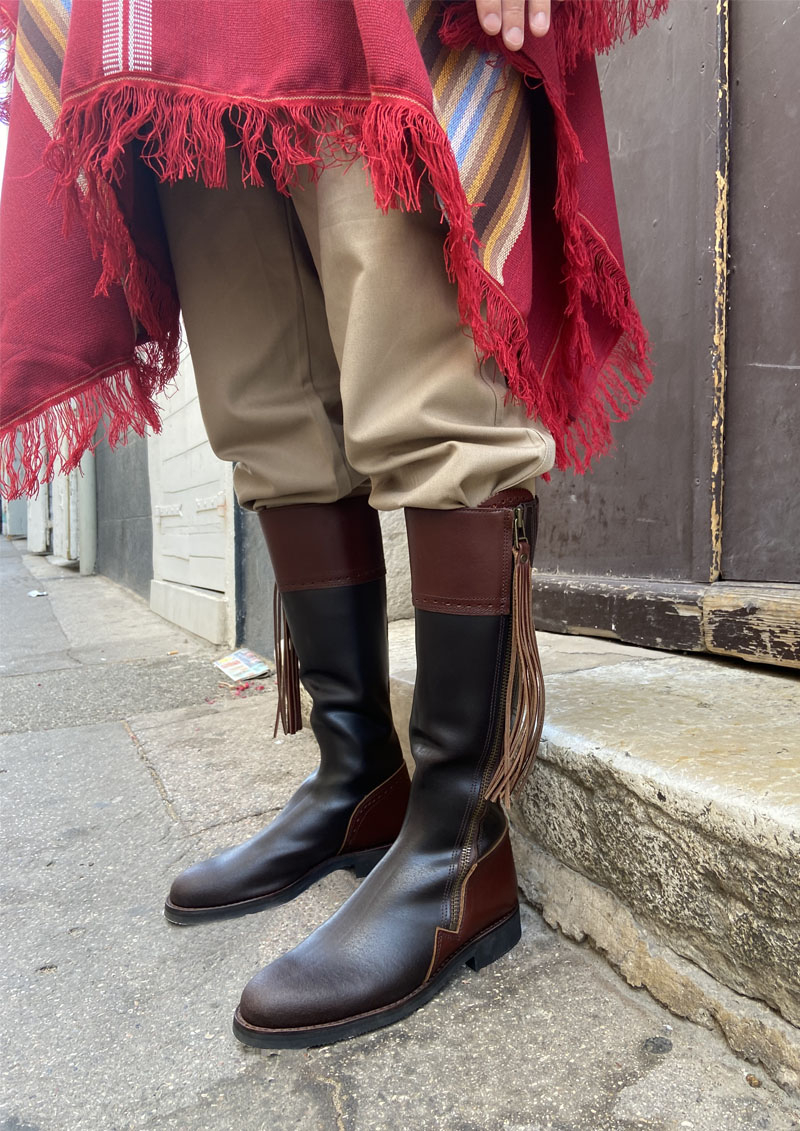 The horseriding boots from Andalusia

Oiled calf leather boots, made and perfect for riding, since the 13th century.

Handmade in the home of Iberian boot-making, in Andalusia.

Durability is deTOUJOURS' passion, but to find a boot model so successful that it has always been made in the same region and used for the same purpose since the 13th century, remains a moving counterpoint to fast-fashion.

These pieces of Spanish historical clothing have passed through time without going to a museum, as they are still on the feet of our contemporaries who have not found a more practical boots to use. The first record of them can be found in a Spanish cave where wall paintings dating from 1200 already mention the existence of a pair of boots, a distant and proven ancestor of the one proposed here.

From the Renaissance onwards, the diffusion of boots intensified due to the strong military demand for horseback riding : they protected the leg while riding, kept warm on the battlefield and prevented the trousers from wearing out prematurely. Its utilitarian function is undeniable, and it is available in multiple models depending on the region of the world and its use (a soft, wide boot in France, hussar-style boots with pleats on the instep, English-style boots or even thigh boots, which could be worn folded down "à la mousquetaire").

Andalusia has been a mythical equestrian land for centuries, as the horses of the region were highly prized in the Roman circus, aware of the exceptional characteristics of the Andalusian horse that are still renowned today. Officially known as the Pure Spanish Breed since the 15th century, its intelligence, docility, elegance, long and wide neck and firm legs have made its reputation, but the agility and mastery of the Andalusian trainers and riders have also forever built the legend of the land, along with the Royal School of Cordoba.

The region has remained a region of reference and excellence in the field, and consequently the know-how of the equestrian boot industry that has developed around it, too. The Andalusian riding boot has maintained its genius for functionality.

These riding boots are hand crafted in the heart of the Iberian boots industry, near Huevas in Andalusia. They are made of oiled calf leather, a relatively matte leather with an oily appearance. This exceptional leather is very resistant and easy to care for (the professionals' advice: a little glycerine soap). The Andalusian cut is based on a slight curve on the outside of the leg, to which the zip is added, also on the outer side. This elegance is underlined by the leather fringes falling from the buckle, topped by a serrated leather strip, which makes them easy to put on and take off. This piece of leather is typical of Andalusian riding boots, becoming their signature.

The rubber sole is ridged for optimal waterproofing, heat retention and insulation. Its flat heel, only 2.5cm high, is ideal for horseback riding as well as for daily use in the city. Our Andalusian manufacturer has designed an ingenious system for stronger legs, a kind of pleated leather, which adapts to all body shapes. This ultra functional boot has been designed to meet all the needs and technical requirements of horse riding and Andalusian riders have not been mistaken, they have worn it from generation to generation. In the arena as well as in the careers, the Andalusian boots have become the best companion of the rejoneadors.

They can be found at the entrances to haciendas and other campos from the south of Spain to the Balearic Islands, right to the very English feet of Kate Middleton, and everywhere in the world where horses are loved. Fashion has largely adopted this technical jewel, whose elaborate leather and fringed tassels have inspired the catwalks of Hermès and Ralph Lauren, who are sensitive to this universe by nature, and Dior and its cruise show devoted to the equestrian world. Fashion is inspired in waves by this aesthetic of the great wilderness.

If today the boot is unisex, it was for a long time exclusively masculine. The 1960s, 1970s and 1980s marked a turning point in women's fashion, the boots were also worn in the city as a symbol of power, like Wonder Woman, but also of independence and freedom. deTOUJOURS provides you with its permanent selection to accompany you in the city or in the country, in a perfect synthesis between lasting elegance and practicality: style in short.