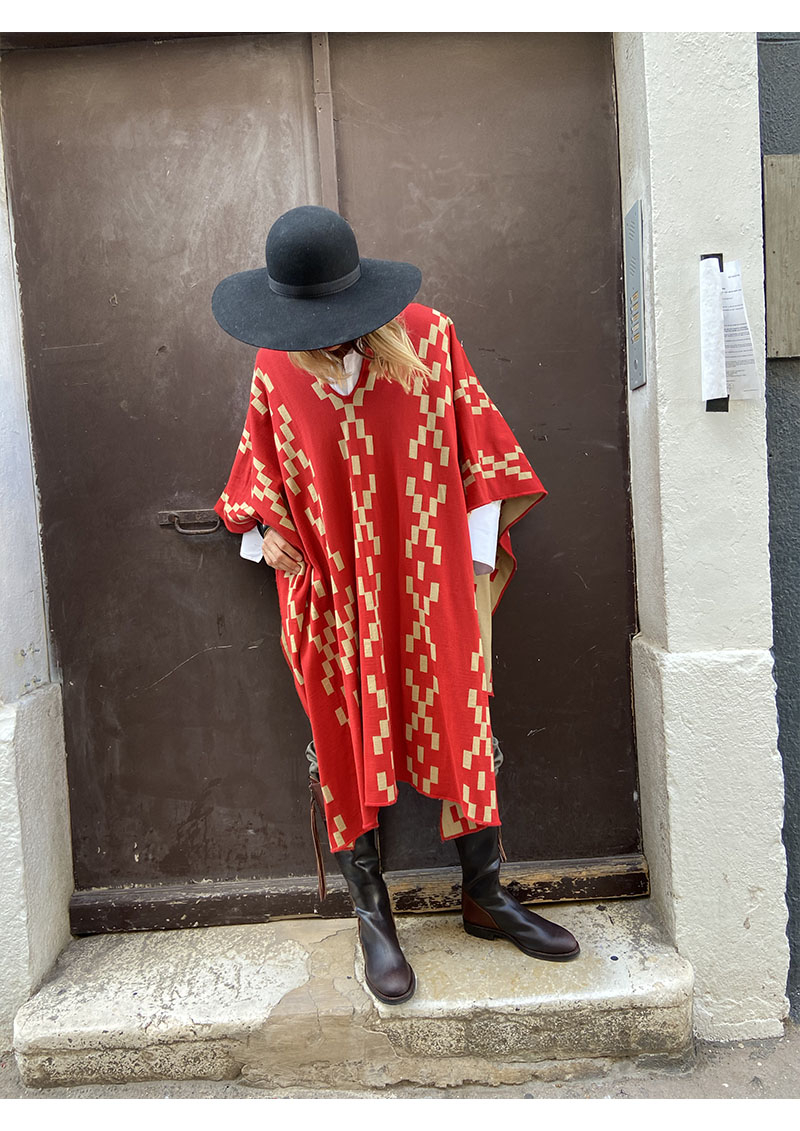 If the Mexican poncho is predominant in the "fashion" representation of this Latin American heritage that has become a worldwide classic, the Argentine poncho brings a new graphic horizon and references, a typical elegance that will revolutionize your vision of this garment.

Historically, the poncho is worn from the Andes to California, but it is particularly used on a daily basis by the gauchos for its practicality and multifunction in their work. On horseback, when the weather is bad, it is used to protect oneself from the harsh cold, when the weather is good, it is worn rolled over the shoulder, and in any weather, it becomes a blanket for sleeping. Sometimes, even wrapped around the arm, it serves as a shield against a too violent enemy. Weapon, scarf, blanket, overcoat, mattress, cape, saddlebag, it is indispensable to the one who rides through the pampas. The irony, certainly, is that "poncho" is etymologically derived from "lazy", because it is not very convenient for the worker.

The design of this traditional garment, woven or knitted according to the pattern, is part of the territory and is declined based on local particularities. Each province has adopted its own patterns and colors. Worn like a flag, this fabric banner is often a sign of social rank, territorial belonging, or a sign of celebrations and mourning. One thinks, for example, of the poncho patria, dark blue on the front and red on the back, adopted by the army in the 19th century, which is distinguished, among others, from the poncho vichara, of rougher manufacture, grey or sky blue with tassels.

Here, deTOUJOURS presents a precious woven poncho directly inherited from the pre-Hispanic Mapuche culture. The Mapuches, an indigenous pre-Hispanic people, mastered to excellence the art of weaving, which was transmitted from generation to generation through oral tradition and gestural imitation. The best weavers were particularly valued and prized, because they played an important economic role, but also because Mapuche clothing was a sign of prestige (the trousseau brought by the husband in the event of a wedding was significantly larger if he wished to marry a good weaver). This technicality continues and our poncho is part of this thousand year old history, respecting the ancestral patterns. The Mapuches use a particular iconography, each pattern becomes a direct reference to their own cosmogony and philosophy: the stars, the spirit, the eyes seeing the soul ... Our poncho uses the beautiful pattern of the "World".

This gaucha aesthetic is now exported beyond the borders and the American youth easily takes it over. The folk and rock culture adopted it as a signature from the 60s. From the Woodstock audience to the spaghetti westerns, the poncho is hoisted as the standard of another way of dressing. An image unconscious inheritance of the free and brave gauchos, which becomes a nonconformist alternative.