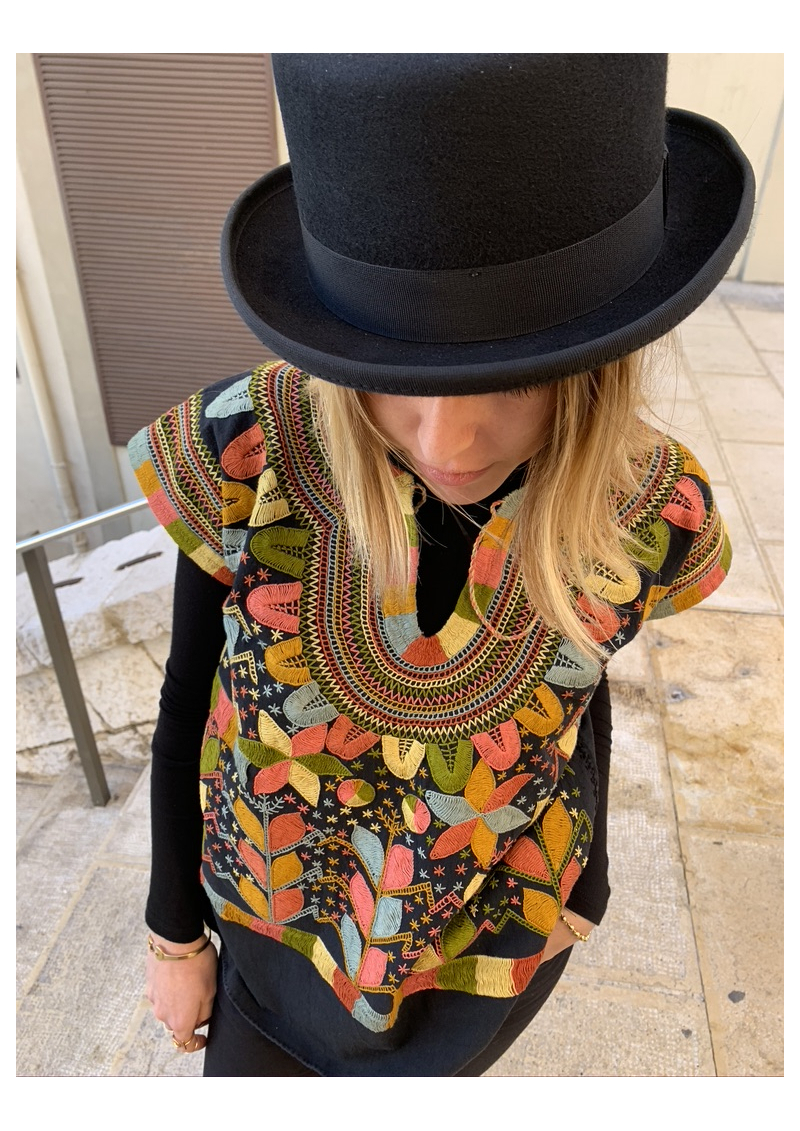 The Huipil of the Cornfields

Each huipil is handmade and has a different and unique pattern. Please, do not hesitate to contact us at contact@detoujours.com for further informations.

The traditional huipil with ancient embroidery, in 100% cotton.

The crafts presented at deTOUJOURS come from the state provinces of Oaxaca and Chiapas, whose weaving and embroidery techniques on pedal looms and even - much rarer - on belts are patrimonial treasures of Mexican culture.

These treasures are brought back to you thanks to the passion of a French woman, Pascale Charmet, who has been studying the language and culture of this country where she travels regularly for more than 30 years, to the point where for the last ten years she has been involved in the preservation and development of the ancestral textile expertise of the indigenous villages of Central America. She has built up a relationship with many communities in Mexico, and has fully intsirenaegrated the rhythm of the craftswomen who take several weeks to weave a Huipil (tunic), poncho or dress. It is not a question of quantity, but of patience and admiration for the exceptional quality of the work, which is only possible in this context.

Meaning of the patterns, origins of natural vegetable dyes and the different weaving techniques, travelling from village to village according to the specialities of the different communities : Pascale provides guidance to deTOUJOURS and spends time understanding their stories, their symbols and their ways of working.

She develops small-scale employment - in remuneration for the time spent so that the women at work can make a decent living from this manual work - and thus contributes to safeguarding these skills in a sustainable way. deTOUJOURS' role is to make this authentic source of inspiration desirable, by supporting it with your orders and disseminating it .

We advise you to be careful with this exceptional garment. It is handmade and its embroideries are precious, we advise you to dry clean this garment and to take it to your dry cleaners.

This incredible embroidered plastron is a central piece of clothing in Mexican culture, a symbol of femininity among all. It is THE favorite garment of Frida Khalo, who wore it her whole life, from early childhood to her glory days, as a signature of her commitment to her land.

Called Huipil, this piece of clothing comes from the long indigenous Mexican and Central American tradition, the ancient Mayas and Aztecs tradition. The National Archive of India, based in Seville and in charge of inventorying information about the Spanish colonies, reports, from the 16th century, the presence of this embroidered piece in Mexican culture, an emblematic piece of clothing long before the fall of the Aztec Empire.

This beautiful design with the embroideries of the corn fields suggested by deTOUJOURS is inspired by a woman's land, Eustaquia, a young Mexican artisan, and the village of San Juan Chamula. The garment is there as a reminder of the precious native indigenious history, in the middle of the twenty-first century. Eustaquia, our Mexican embroiderer carries on the reproduction of the "milpa" or corn fields of her elders on these blouses.

Situated in the south of Mexico, in the Chiapas, it is a village of natives, speaking indigenous languages such as Tzotzil in timeless landscapes, with colourful small houses and a central church, which makes the reputation of the village. A place where the history of the Spanish Christian conquest and the permanence of pagan practices and shamanic rites combine. Hundreds of candles are lit on the ground, placed on pine needles, the benches have been removed, and so have the bells, symbol of a reappropriated and destitute Christianity. Prayers are loudly and above all, in traditional clothes.

Simple, made of two or three panels of fabric sewn together with a wide opening for the head, and two lateral ones for the arms. The huipil, this unchanging foundation, comes in many variations: long, short, in velvet, cotton, silk or jute, embroidered with more or less complexity, with square, round or simple neckline. Its use depends on the occasion, a marker of age and life, in the history of women and traditionally considered a gift from pre-Hispanic goddesses. It also has cultural value, a kind of pride in the face of an indigenous culture that is weakening and dispersing. It continues to be an essential marker of identity for those who create and wear it.

The Spanish progression in American lands was not only made by the textile, mixing the existing Aztec with the Hispanic patterns and codes, the huipils tell the aesthetic, visual and symbolic history of Mexico. A cultural syncretism is created which this clothing clearly exemplifies.

These corn cob designs are typical of Mexican embroidery, often combined with elements of flora and fauna, an obvious tribute to the omnipresence of nature. These are the same patterns that will inspire fashion designers.  Repeated, reinterpreted, they appear everywhere in collections all over the world, quoted and adored.

Tributes are obvious, from Jean Paul Gaultier to Isabel Marant, from Christian Lacroix to Dior in the Maria Grazia Chiuri period, from Eli Saab to Dolce Gabanna or Saint Laurent in the Yves period.

At deTOUJOURS, it is exhibited in its simple and genuine design, the huipil of the Chamula fields, which brings a thousand-year-old culture, to be incorporated into our contemporary wardrobes.