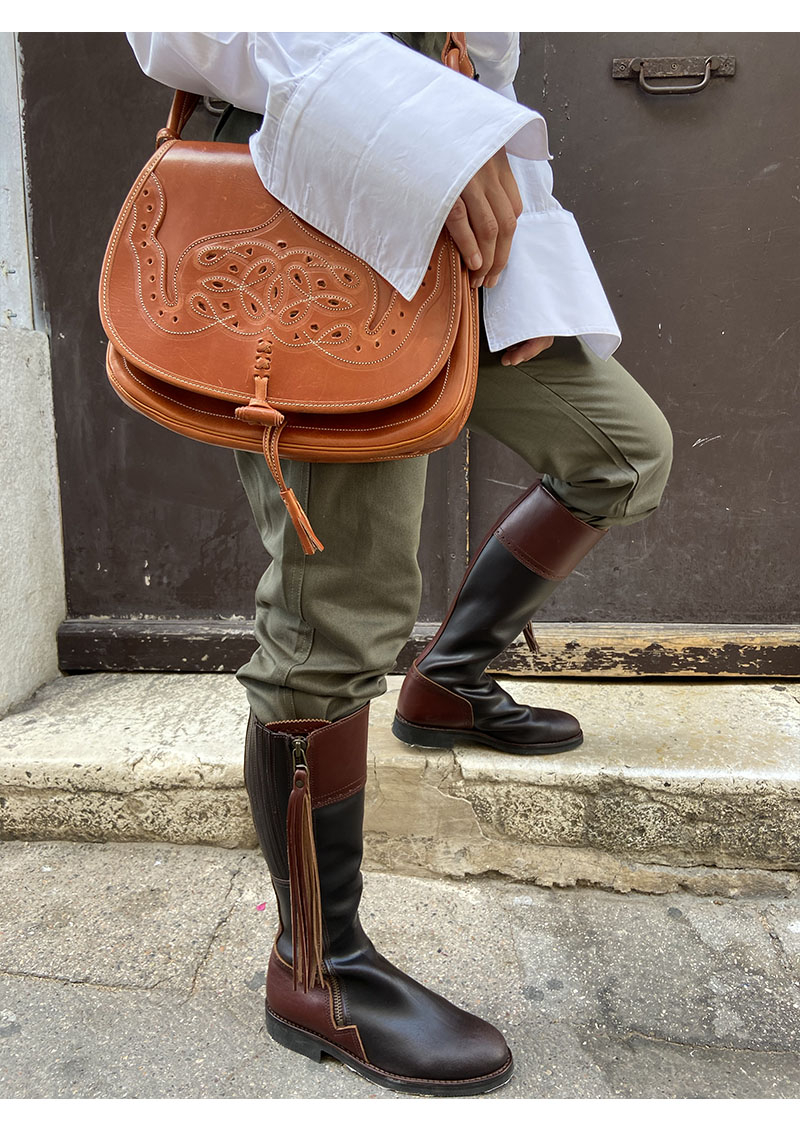 Genuine Andalusian embroidered satchel, according to the traditional know-how of the leather masters.

In brown leather with white stitching.

One large pocket and one small pocket on the front of the bag, hidden under the flap.

The leather of this bag can be maintained with a colourless shoe polish. It is advised to store it in a dry place. If the leather gets wet, wipe it off and let it dry in the open air, away from a source of heat.

What has allowed this bag to come to you intact in its graphic details and its know-how is due in large part to the passion for orientalism. A passion that has been infused for so long that it has been assimilated to the point of forgetting its Arab-Andalusian source, and that Hispanic culture would eventually spread to the territories of Europe and the Americas.

This time around, deTOUJOURS has travelled beyond the borders of the Pyrenees to the furthest regions of Andalusia, to find the origin of this embroidered satchel according to the Spanish tradition, but not only. The very term "maroquinerie" (leather goods) has its obvious origins in Morocco, and in particular in Almohad Fez, where leather work was an art. From the end of the first millennium, these products were exported throughout the Iberian Peninsula, as a result of the Arab conquests of Spanish lands. Andalusia quickly became a privileged place for the establishment of leather goods.

Cordoba leather, also known as Andalusian leather, was exported throughout Europe, to the palaces of high dignitaries and royal families in France, Italy and Flanders. This virtuous art, directly transmitted to the Spanish by the Arab conquerors, was inspired by a tradition that actually originated in the city of Ghadames, in Libya. As true ancient tradition, it was established in Courdoue in the 11th century and is still preserved today in the most renowned museums in the world.

Andalus leather looks like carved wood, fine marquetry, and the prestige achieved by these "guadameciles" of Cordoba, embossed, polychrome leathers decorated with gold and silver leaf, is historic. The leather was stretched over panels. Andalusian leatherworkers are acknowledged as maestros of this kind and the tradition goes on: in Cadiz, where the great luxury houses collaborate with the workshops, in Almeria, Malaga and Jaen.

We turned to the workshops of a more rural village in the heart of Andalusia, renowned for its work in saddlery and equestrian equipment. Here, the saddlebag is above all designed for horsemen, and the activities of the leather industry have always been linked to the supply of the elements necessary for equipping horses. It is a precious technical digest, designed for its daily and multiple uses, on horseback of course, as well as on land. Its shoulder strap leaves the hands free to do other things, its thick leather can stand up to any test, and yet this robust skin is nuanced by the elegance of its design. Its perforated, serrated leather reveals an oriental design - its delicate arabesques almost echo the memory of moucharabiehs.

This bag is much more than a creation or a tribute, it is the original production of the history of a territory, the iconic piece to the heritage and secular know-how of oriental leatherworkers. All the major fashion houses (Loewe, Dior, etc.) as well as the mass-market have paid tribute to it one day with varying degrees of success. Latin American culture is also full of oriental references that were brought to them by the conquistadors, and which we can even see in westerns.

At deTOUJOURS we bring you the original design of this unique piece, that of our Andalusian craftsmen, masters of leather since ever. The leather is stitched with white thread, a large pocket can contain the essential as well as the superfluous, and a small pocket allows, at any time, to slip in the most precious belongings.