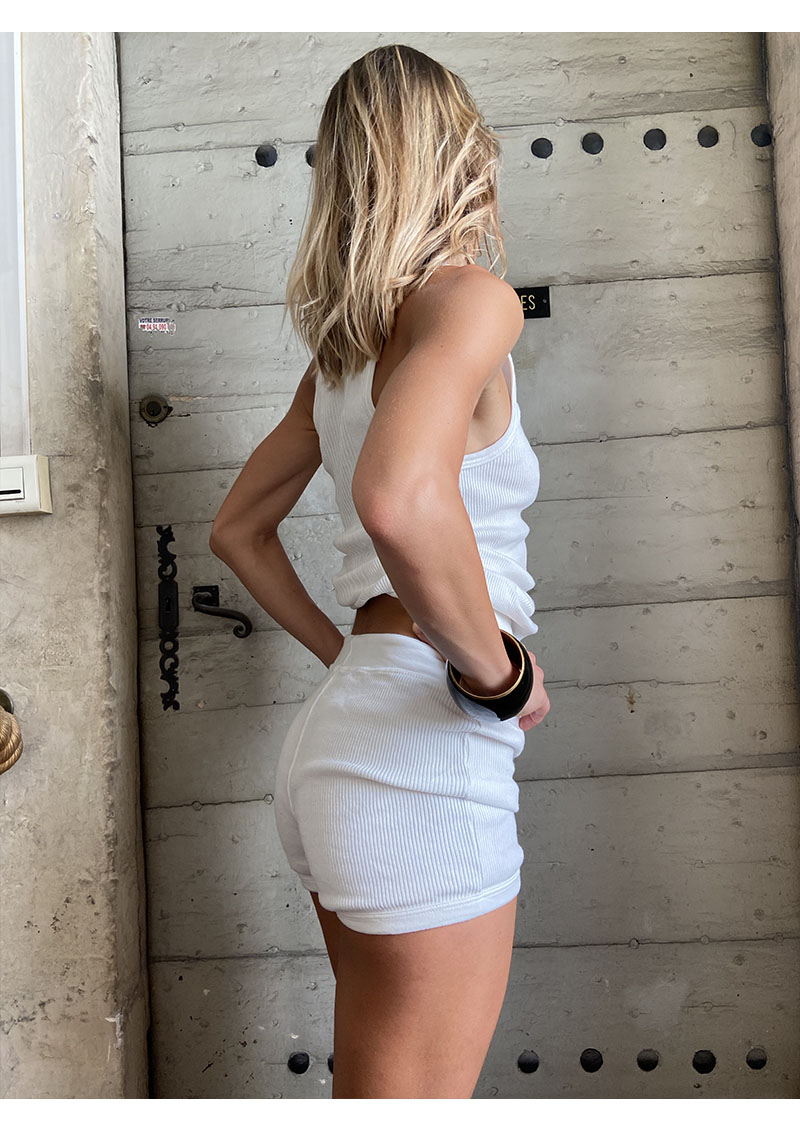 With the authentic looms of the traditional Marseilles tank tops, they perpetuate this Richelieu knit, in their original pattern, and cut an appealing pair of knickers which deTOUJOURS has the exclusive right to re-edit.

For sanitary reasons, the underwear must be returned in perfect condition, unworn and unwashed. Please try them on over your own underwear. Otherwise we will not be able to refund your item.

The men's version of the iconic 100% cotton Richelieu knickers, reedited by deTOUJOURS

THE LEGACY OF THE WIFEBEATER T.

The founding family of SUGAR, clothes manufacturers and leathermakers, by chance discovered a large stock of sleeveless t-shirts (known in the U.S. as wifebeaters) at the end of the 1970s and bought it.  They decided to hand-dye part of this stock in trendy colors in order to appeal to women.  Eventually SUGAR started producing the t-shirts themselves, maintaining their beautiful ribbed quality and timeless appeal.

100% cotton, woven and dyed in Marseille.

Literally, "the dockworker" is the port worker who carries out the unloading of all kinds of goods, like the workers in Charlie Chaplin's Modern Times. The term is attributed to this tank top that appeared in the 19th century, which the dockers wore for their hard work.

The founding family of SUGAR, a family of tailors and leatherworkers, discovered by chance a stock at the end of the 70's on a sale and repurchased it.  SUGAR's ingenious idea to enhance this heritage was to dye certain tank tops with passion and by hand in the colours of fashion, khaki, blue and pastel pink, so that they could be adopted by women. In St Tropez, its faded colours and tight-fitting cut seduce and the little SUGAR tank top starts to become a sensation.
Instant success. SUGAR was the first to introduce this initially invisible knitted underwear, an intimate object close to the leotard, into the ready-to-wear market. The art of dyeing continues to be explored by these masters of colour, who carry out the operation themselves in the 12th arrondissement of Marseille. The entire production chain is integrated, from weaving to cutting, from dyeing to selling in the shop.

In France, Switzerland, the UK and the USA, the SUGAR docker's tank top is making its way. The 80's were craving for this new attitude and the jersey of the harbour men went upmarket, being worn in magazines, under the eye of the greatest photographers and top models at the highest point of their careers.
The brand created a pair of panties in the same cotton rib, with - a charming supplement - a small string at the waist: a continuation of the childlike style given to women by the men's marcel. Once again, it was a success.

The production was thus progressively concentrated on the women's model exclusively, leaving aside the original, male model. It is on the suggestion and at the request of deTOUJOURS that Sugar is once again offering a men's version of this iconic tank top. Exclusively at deTOUJOURS, we have worked together on the cut and thought about the use. At the source of the model garment, this men's tank top is the direct heir of the original tank top of the 19th century. Initially prized by men for the absorbent quality of its singular cotton material (tubular cotton) and for its hygienic qualities, it has become an integral part of the men's wardrobe.

Its underarm cut, larger than that of the women's model, ensures comfort in all circumstances. The body was liberated and this popular garment became, from the 1970s onwards, a standard of gay culture, today often regarded as "neutral" in gender as well as in minimalist forms.