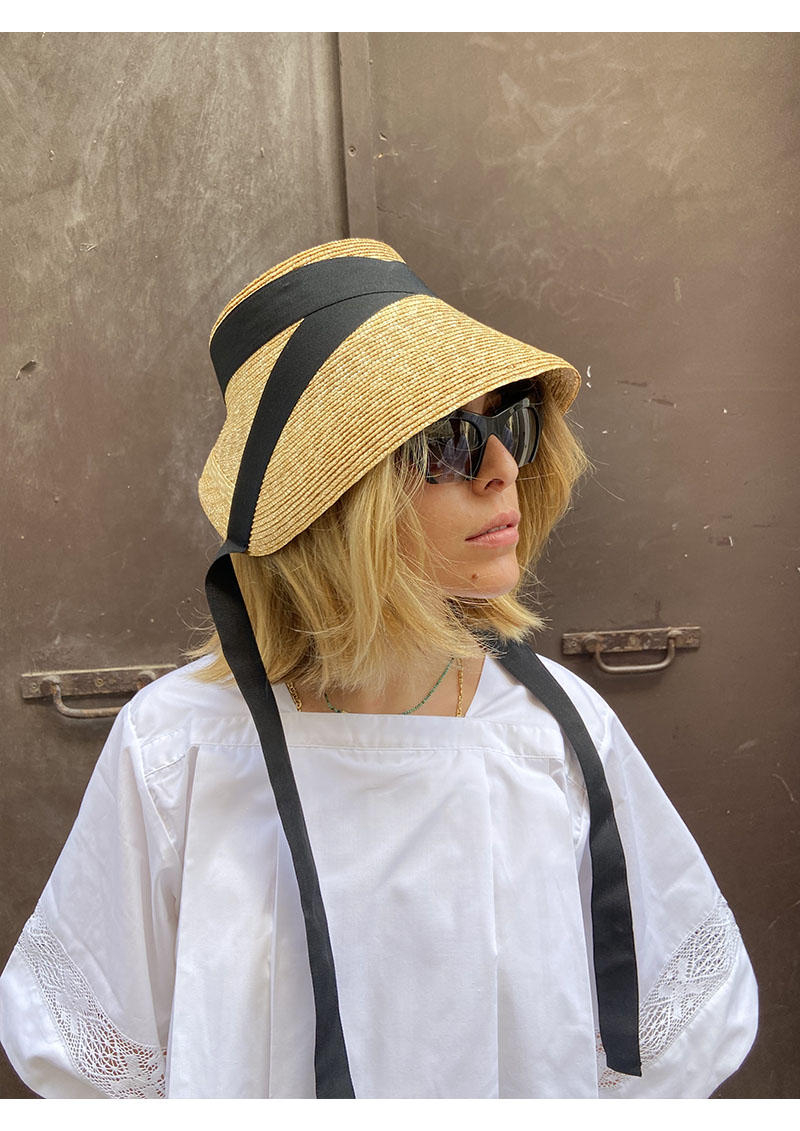 Halfway between the aesthetics of Nelie Olson in "Little House on the Prairie", the world of "Peter Rabbit" by Beatrix Potter, and the ladies of the English countryside, this straw hat is also the one worn by the pretty girls of the French countryside in the centre of France, which reminds us of a fantasized shepherdess. Still made for the Creusois folklore, it comes to us with its unique bell shape.

Thus, your Creusois hat is the epitome of an accessory that has lasted for centuries with its strong design. Its wide brim visor and rigid neckline protect from the sun, while keeping it simple. Its timeless shape is embellished with two wide, graphic black ribbons. From Jane Eyre to the British characters of Jane Austen, from the foggy atmosphere of Pride and Prejudice to the Flemish paintings of the 16th century, this hat, between a skullcap and a shepherd's crook, has travelled through the ages and across borders, so much that most recently it has been revisited on the catwalks as a relic of a naturalist dream. It has been seen at Simone Rochas or Chanel, as well as in the streets of Japan and Korea for its minimal shape. The straw hat in the widest definition is a permanent feature of women's wardrobes.

From the Middle Ages onwards, it was the essential accessory for rural work, adopted in the fields and designed for hard work, and gradually became a popular hat for any outdoor activity for all ladies. In the 16th century, thanks to the influence of the Medici, it became a noble hat, attracting the royal courts and the European notables. Braided from reed or straw, with wide edges structured around the face of the peasant woman and the nape of her neck, for its essential function of protection from the overwhelming sun. Sun protection factor 50 without chemicals and with extra style. The straw trade then intensified and villages that were previously unknown quickly became major production centres, particularly in Italy, or in the region of our manufacturer in the Tarn et Garonne. It was during the 19th century in France that the straw hat, which had previously been a rural hat, became a "garden hat". Elegant women wore it for walks but also dared to wear it for more formal occasions, embellishing the "falsely modest" headgear with ribbons, flowers and embroidery.

At deTOUJOURS, we select your straw hats from the last French hatmaker who still works by hand. Named Living Heritage Company, his workshop is based in the south-west of France. The high quality of the straw and the fineness of the weave are the keystones of a good straw hat. Its particularly delicate and homogeneous weaving gives it great resistance, preventing it from getting fragile with use.