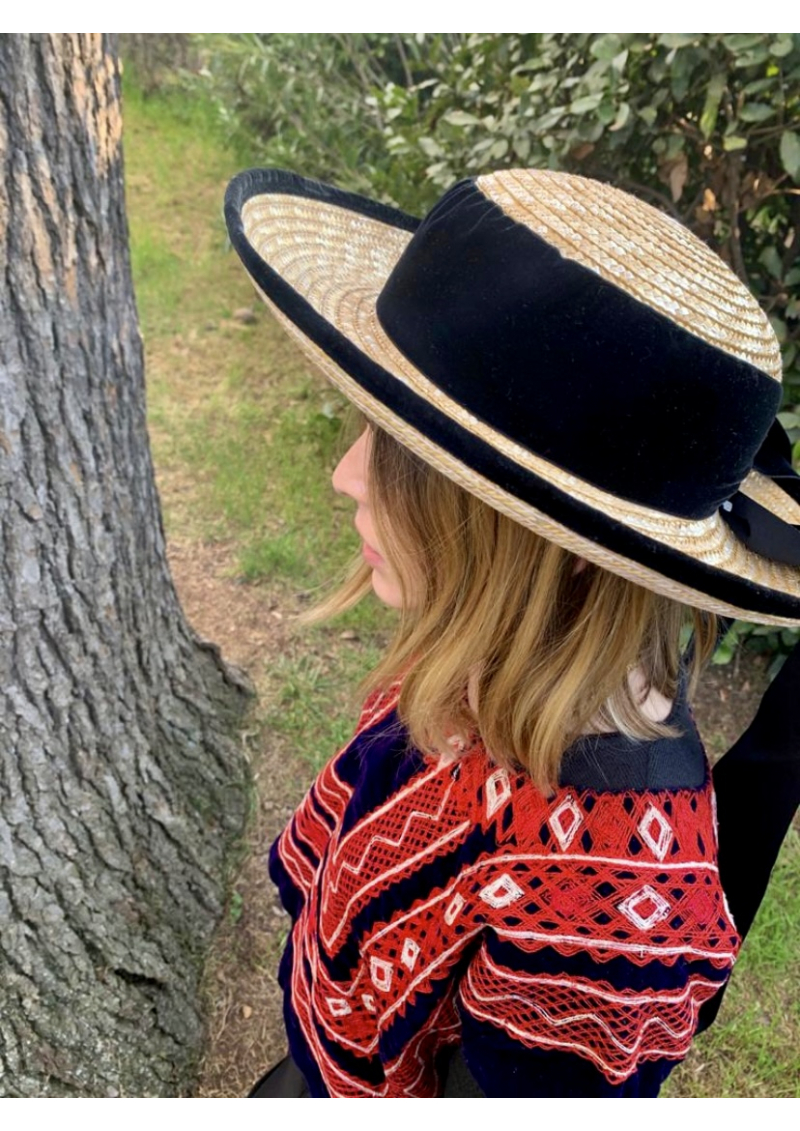 The genuine straw breton hat and its velvet ribbons, from the 19th century

The French hat maker who still designs them, makes them in the best straws, using a sewing machine to assemble the mother braid with precision and hand finishing. The company comes from a family tradition of hat makers based in Septfonds, the heart of the straw hat industry since the 18th century.

The hat, with its felt, cardboard or straw structure, was the exclusive privilege of the nobility.

This Breton hat comes from a time when the way everyone was dressed was a social marker. In Brittany it was for a long time the exclusive feature of the aristocracy, before making an incursion into the bourgeoisie, and into all layers of society. Still preserved thanks to the strong Breton identity which language and traditions still survive in France, this hat is still made for folklore and celebrations which punctuate the key moments of the year, or of personal life.

It is originally the only hat for men that has these long velvet ribbons crossed in a bow at the back, and which float. Little boys, young men, and middle-aged patriarchs share this hat. Younger children especially wear the straw one, the felt version being more common among adults.

The symbolism of these wide ribbons is very specific: a young man who is not engaged has simple, unembroidered black ribbons, then once engaged they are embroidered by his fiancée, with more or less sophisticated designs depending on the wealth of the family of the fiancée who finances this work. Then, once married, the hat is without ribbon.

When the straw hat became more of a trend than a social code, in the 19th century, the long ribbons typical of this region of France became an aesthetic that many designers remembered, and they stopped being a masculine symbol as in their original culture.

The painters will finish popularizing the casual elegance of new recreational habits making straw hats legion, when picnics are enjoyed on the banks of the river, or in the parks on Sundays with friends or family.

Claude Monet, who settled in 1870 with his family in Argenteuil, back then a small yachting town popular with Parisians who loved sailing and boating, illustrated these new coquettes alongside boats, blue skies, and water lilies floating in the Seine's movements.

The Impressionists in general helped to popularise these hats with their very long ribbons by painting their contemporaries in the trivial aspects of their daily lives, waiting for the train in Edouard Manet's work, bathing in a river in Camille Pissaro's, or in Claude Monet's garden.

Traces of these impressionist hats and their long velvet ribbons can be found in Haute Couture. With Gabrielle Chanel, the designer, and in Dior's "new look" from 1947.  In the 1950s and 1960s, the reinterpretation of this original piece continues, without knowing the real source, as it has moved on since its birth and away from its original territory.

At deTOUJOURS, to be sure to have an endless source without waiting for the next fashion season to adopt them, or for the creator who will refer to them in a tribute for a season, we are going to look for you the one of the Breton folklore and tradition from those who still make it for the regional folk market. It is up to you to give it a new life, while putting a little fancy in your life.

The French hatmaker who still designs them, produces them in the finest straws, using a sewing machine to gather the main braid with precision and finishing by hand. The factory comes from a family tradition of hat makers established in Septfonds, the birthplace of the straw hat since the 18th century.